BIO represents all living things such as animals, plants and mankind. And CERA represents 'ceramics' which are used in many industries like semiconductors, batteries, aviation, glass, and more.

The three colors symbolize to earth(地), mankind(人), and heaven(天). In the theory of Eastern philosophy, there are 'yin, yang, and five elements' and 'heaven and earth'. Heaven , earth, and mankind are taken from the theory of 'heaven and earth' and mean roots and stems. Mankind exist at the center of the sky and nature, embodying respect and coexistence, which means life. Biocera, which specializes in water, air, and bacteria, has the meaning of harmonizing the yin, yang and five elements.

The shape of the shape of BIOCERA symbolizes the seed (nature), the fetus (humanity), and the jade (ceramic). The seed represents the principle of coexistence and polarity in nature, and even the cycle of seasons. Jade comes from an accessory attached to a crown which was found in the stone tomb of Sillia empire during the Three Kingdoms. The Jade connects people and heaven which was believed in ancient times. Lastly, it was a shape of conceiving a fetus in the womb, representing mankind. 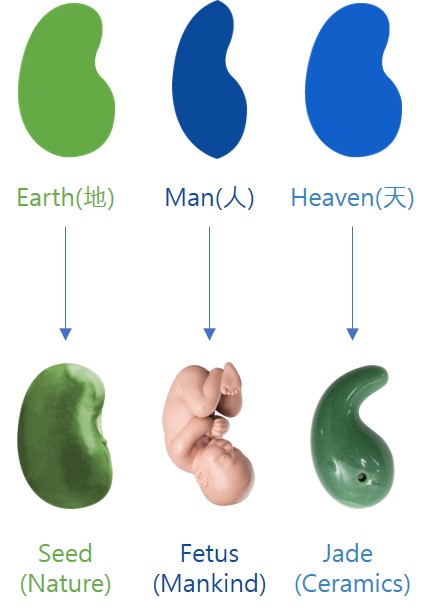 Biocera A.A (Antioxidant Alkaline), a brand of antioxidant alkaline water, is a German jug product that Biocera met at the Chicago Housewares Fair in 2000, and started with Stephen, a top company. At the time, Stephen, who was interested in the material of the anti-oxidation alkali-generating Biocera ball, proposed to apply it to the water purification jug filter. With that opportunity, the first generation of Biocera alkali reduction return zerg was developed and commercialized in 2001. In 2006, at Stephen's invitation, Biocera CEO, Dr. JEON Hyoung-Tag went on a business trip to a zerg manufacturing plant in Poland, Europe. Not only biocera from Korea, but also experts from water-related companies from the US, Spain, and Russia were invited together. At that time, the alkaline water market was forming quite a bit in advanced overseas countries, and the concept of negative ORP antioxidant power was ambiguous.

Water-related entrepreneurs in various countries will be informed of the technology of water with Negative ORP antioxidant power as the pH of purified water goes through the Biocera ball and rises to alkalinity. ORP refers to the strength of the tendency of a substance to be oxidized or reduced. In tap water, drinking water, and RO water, the ORP level (mV) increases, whereas in water that has passed through Biocera ball, the ORP level (mV) is lowered like green tea and vitamin C, so it is an antioxidant. you will have power. It can be seen from the experiment with iron nails. As a result of adding the same amount of iron nails to tap water and Biocera water and watching it for more than a month, it shows antioxidant power that quickly rusts in tap water and does not rust in Biocera water.

In 2007, Biocera announced the start of the brand name of ‘BIOCERA A.A (Antioxidant Alkaline)’ by adding an antioxidant in front of the alkali of the existing first-generation alkali reduction return zerg. From the second-generation Biocera A.A Water Jug product released under the changed brand name, it is manufactured and exported in Poland, Europe. The background of the birth of the new concept antioxidant alkaline water brand is based on the best German water purification jug R&D technology, a Polish manufacturer with the best production facilities, and Biocera, the best ceramic filter material in Korea. We have a lineup of antioxidant alkali products and are exporting to more than 40 countries in Korea and around the world.

It represents nature, alkaline, water, softness, Yin, and feminity. The word 'Return' in the Biocera Antioxidant Alkaline Return Jug represents to go back to the past and return to nature. Nowadays, in modern society, people are used to acidic lifestyles such as high cholesterol acidic foods, high caffeine drinks, rich calories, living in harmful environments with environmental pollution, exposed to water and air pollution, and the most important, not drinking enough water every day. Dr. Jeon Hyoung Tag gave the meaning of 'return', hoping people with acidic lifestyle habits could live happier lives by drinking natural spring mineral water like Biocera antioxidant alkaline mineral water.