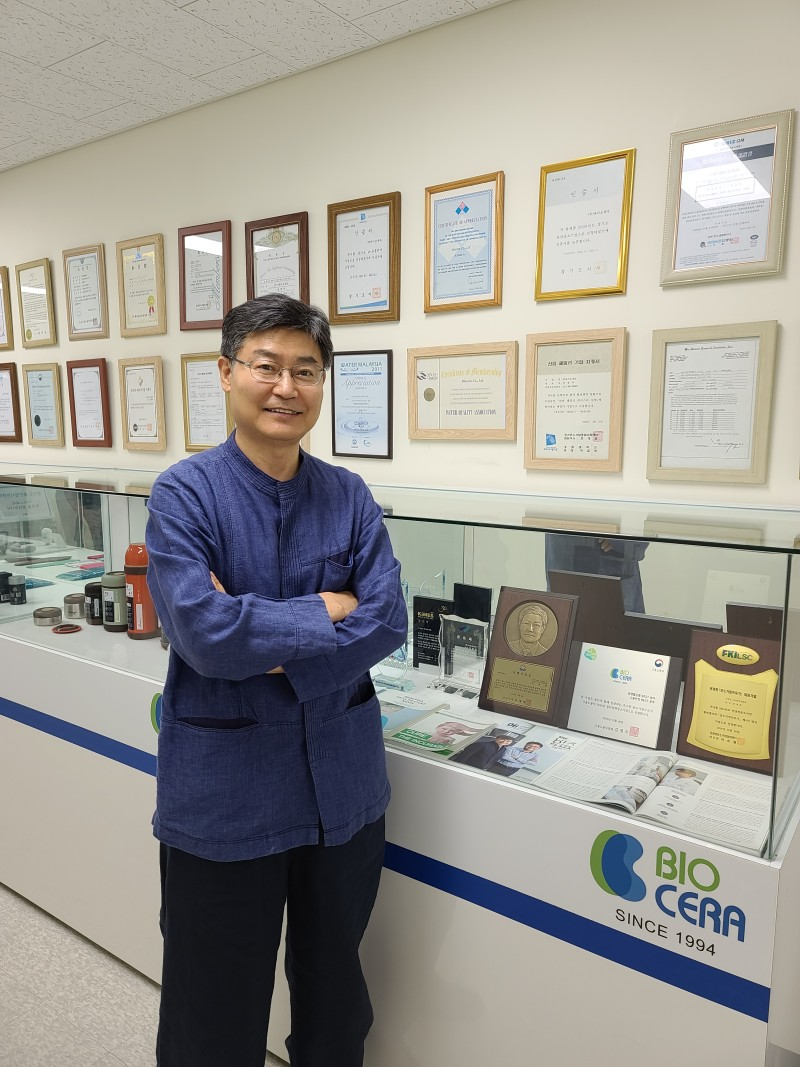 The CEO of BioCera Dr. Jeon Hyoung-Tag has said he has encountered bioceramics for the first time while majoring in inorganic materials engineering. He fell into the fascination of bioceramics in college, and naturally became an expert in bioceramics now, having extensive experience in ceramic raw materials, combinations, and molding methods in various ways in in-depth research in graduate school and researcher.

Seeing the infinite commercialization potential of ceramics, he founded the present company in 1994 as a young entrepreneur in his 30s. Various products using bioceramic balls sold by BioCera are eco-friendly products that are harmless to the environment with excellent performance, showing that sustainable environmental protection and human development through technology are possible at once.

It is said that she developed an eco-friendly detergent-free washing ball that is as effective as detergent by using ceramics without having to add laundry detergent because her heart hurts when she saw her daughter suffering from atopy. Now, when you see your mature eldest daughter, you will be proud and remind you of old thoughts.

BioCera's flagship product is "BioCera Balls". Inorganic materials that are common on the earth are made by processing and molding at high temperatures, and they are widely used in everyday life such as ceramics as well as spacecraft. Since there are many heavy metals, it can be dangerous to the human body if applied incorrectly. The advanced technology to remove harmful substances and the production know-how of BioCera specially processed to be rich in inorganic minerals cannot be followed anywhere in the world. Therefore to supply the safe and best quality bioceramics, our BioCera Balls are tested and received NSF42.

We produce 8 types of ceramic balls in various sizes depending on the application. It's hard to make ceramic balls homogeneous. BioCera is the only product free from the dangers of heavy metals, although it has been followed a lot from abroad. Raw materials are imported from abroad. BioCera's technology is applied and it is produced in-house at a domestic factory.

The bioceramic ball is not a simple inorganic material, but a water treatment carrier made by mixing and processing various functional ceramics specially processed with ceramics rich in far-infrared emissivity and inorganic minerals. However, the bioceramic ball we studied can easily make hydrogen water without complicated procedures by simply getting in the water. Currently, the main product is an alkaline filter used in water purifiers. As you go through the BioCera product, the water turns weakly alkaline, helping to balance the acidity of the body.

2. It is amazing that you developed these excellent eco-friendly products over 20 years ago.

The first child suffered from atopy. The atopy got worse when I washed laundry with laundry detergent. So, at the time, we developed a "detergent-free laundry ball" that can weaken the bonding strength between fibers and dirt by breaking water molecules into small pieces using ceramic balls and amplifying vibration energy. It was more than 20 years ago.

By reducing the use of detergent, which is a chemical component, it also prevents skin diseases such as atopy and itchiness and can be used more than 1,100 times with a single purchase. As soon as the product was released, I expected it to hit the so-called jackpot. But the reaction in the market was unexpected. Consumers were very reluctant to wash laundry without using detergent. It was hard to break stereotypes and convince them.

It was important to promote the product, but the priority was to publicize the possibility of developing eco-friendly technologies using ceramic balls. I participated in exhibitions and seminars both at home and abroad as long as it was an explanation of alkaline minerals, pH, and redox. As interest in eco-friendliness around the world increases, more countries are interested in our products.

3. Listening to it, it seems that it is more popular overseas than domestic. I heard that it is also popular in the Indian market, which is more difficult than in China.

In the mid-2000s, a product was introduced to a home shopping in Germany by accident, but as word of mouth began to spread, demand in France and the UK also surged. Since then, products have been steadily sold in popularity in Europe and the United States, and they have also entered the United States. Currently, various companies are selling alkaline water using BioCera products. Oh, fermented juice made with alkaline water made from BioCera products is also popular. This fermented juice was well known as a juice that famous Hollywood actors often buy.

In India, where water quality is poor, BioCera is famous as a portable water filter. In India, it is more important to verify that these bioceramic balls are genuine products made by BioCera than to advertise the excellence of bioceramic balls and promote their products. There are many consumers who want the bioceramic ball of BioCera.

Thanks to this, overseas sales are higher than domestic sales. Domestic sales mainly go to filters that generate alkali, hydrogen, and minerals, and go to most filters of domestic water purification companies. Although domestic products are sold online to general consumers, we are focusing on overseas sales rather than domestic sales due to a lack of manpower. In the case of chlorine removal showers, which are popular these days, we made 20 years ago and were exporting only to the US and Europe. This is also a bit unfortunate.

4. What are the plans of BioCera in the future?

In 2016, we participated in the '2016 International Environmental Energy Industry Exhibition (ENTECT 2016)' and received the 'best of ENTECH 2016' award. In the early days of Pangyo's formation, Bio Cera also settled in Pangyo, but after that, it was selected as one of the top 100 companies in the Korea Silicon Valley, and its technology was recognized at home and abroad. For more than 20 years, we have well confirmed the market potential of ceramic balls. The use of alkaline water using BioCera's products is endless. Over the years, we have lined up products such as water purification, laundry balls, and cosmetics mainly in overseas markets, but in the future, we are planning to enter the domestic and international food sector using BioCera products.

The water industry encompasses various fields. Water and sewage account for most of the industry. That's why I think the main issue that the Gyeonggi Water Industry Council deals with is the water and sewage sector. I think the council was formed to promote the development of the water industry in a balanced manner without being biased toward one field. Our company is a company that deals with home healthcare products. Although there are not many companies, I hope that the Gyeonggi Water Industry Council will be able to capture the voices of companies working hard in small fields.